In recent month's, I have been enjoying a collaboration with Hillhouse cousins, Joseph Moore and Billy Hillhouse. We are all proven descendants of William Hillhouse of the Province of South Carolina (d. 1778).  We have been trying to establish credible documentation behind the Helen T. Hillhouse & Laurens Petigru research concerning the possibility that William is a son of Samuel & Rachel Hillhouse, who some family tradition's believe married in Ireland in 1715 and immigrated to Boston in 1719 along with Samuel's brother Rev. James Hillhouse. It is our hope that by laying down the pieces of documentation we've found, we can trace William back to John and Rachel Hillhouse of Free Hall.  Please use the highlighted text links to access the documentation.   This page will be updated as more of the story comes to light.

If you have new credible documentation to share concerning the Hillhouse time frame between 1715 and 1782, you are invited to post comments at the end of the post. 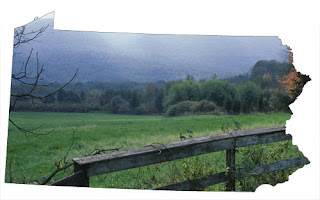 
Marriage of a son and a daughter with the Dickeys, and a son to Margaret Chambers, suggests that William and his family probably lived in Paxtang, Donegal or Derry Township in Lasater (later Dauphin) County, or in Cumberland County. Descendants of Moses Dickey, and of the four Chambers brothers who settled originally about 1720-1730 in the Fort Hunter area north of Harrisburg, were in both counties.

In the Old Paxtang and Derry church records, the names - Dickey, Stevenson, and Chambers - appear, all three being family names connected with either William or his son John. Moses Dickey was a Justice of the Peace. A Roland (or Rowland) Chambers was the first elder of the Donegal Church, 1720-1733.
taken from the Hillhouse Family Book

In November 1717, William Homes was in communication with the Reverend Cotton Mather, his son Robert, and land speculators who were anxious to develop the area along the Kennebec river. It has been suggested that this correspondence was followed by a meeting in Boston, at which Robert Homes, Cotton Mather and the Kennebec speculators agreed to transport colonists from Ulster. Robert sailed for Ireland in April 1718, and returned ‘full of passengers’ seven months later.

taken from The 1718 Migration﻿
﻿
The fact that Rev. James Hillhouse came to America in 1719-20 and his association with Rev. Cotton Mather is well documented.  We have clues that lead us to believe Rev. James sailed from Ireland with brother Samuel & his new wife Rachel and a group of his parishioners.  They arrived in Boston harbor on November 30, 1719 but their ship, Captained by a man named Dennis, was warned out to Spectacle Island because of illness on the ship.
The ships coming out of Ireland in 1718 carried small pox, infections and other illnesses.  Boston's ports were forced to divert ships with diseased passengers to Spectacle Island to receive hospital treatment or wait out their quarantine before they were allowed on the mainland.  On November 3rd, the Elizabeth (the ship referred to in the first paragraph) arrived from Ireland carrying 150 passengers, many of whom were solicited by the 1718 Migration project that Cotton Mather participated in.   The ship was warned out to Spectacle Island and the large group overwhelmed the hospital, forcing the people of Boston to find other lodging for some of the passengers.  The ship that was warned out on November 30th would have added to the overcrowding.  It is thought that due to the confusion, many names of the passengers on both ships were lost.  No Hillhouse is listed on either of the ships.  However, we have found other passengers whose family tradition states they traveled with Rev. Hillhouse.  Alexander Gordon was one of these parishioners and his name is listed on the ship warned out on November 30th.
We are researching the idea that Samuel and Rachel stayed in the Boston area, as it seems certain they did not follow Rev. James when he was called to New London, CT in 1722.
Caveat Book No. 1 Page 230 for PA in 1745.
"Samuel Hillhouse warrant granted to Jacob Myer
dated the 15th of March 1745"
Descendants of John & Mary Hillhouse Reily, show Mary as the daughter of Samuel & Rachel Hillhouse (married in Londonderry in 1715).   Samuel is believed to be buried in  Cecil County Maryland.  Mary Hillhouse Reily is noted to have been born in 1720 in Pennsylvania and died in 1765 in Chesterfield, Virginia.  Her husband John died there in 1783.
Mary was said to have a brother named William, who we have found evidence of purchasing 100 acres of land in Chester County, PA on 10 March 1747 and Wm Hilhouse is listed in the Maryland Militia under the command of Captain Robert Sollers October 1, 1748 at St. Leonard Town
Recent DNA testing has linked William with a brother: Samuel Hillhouse (d. 1782) of Rowan N.C.  We are very fortunate to have a copy of his Will.  Samuel is buried at Thyatira Presbyterian Church Cemetery in Rowan, County, N.C.   Concerning the name change to Hillis:  Samuel Hillhouse's will is spelled out as Hillhouse. However, it appears his son Samuel Jr. changed the spelling of his name to Hillis.  His descendants found the broken stone and preserved it in its new memorial. 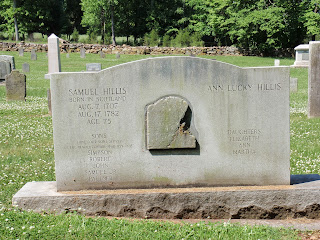 William first appears in what is now York County, S.C. in 1755 with a purchase of 450 acres of land.  His story is well documented forward in South Carolina.  Although, his stone is lost, he is believed to be buried at Bullock Creek Presbyterian Church Cemetery, in York County.
The following grant was recorded in Royal Grants, Vol. 12, Page 113 dated March 8, 1765. and gives William Hillhouse 200 acres in Craven County on the north side of Broad River on a branch of Turkey Creek, bounded on all sides by vacant land. According to "Colonial Plats, Vol. 6, page 530, the land was surveyed December 5, 1764.

The first regular minister, Reverend Adam Boyd, mentored and recommended by New England’s celebrated Cotton Mather, was ordained in the log meeting house in 1724. He traveled by foot or on horseback going from settlement to settlement to reach his parishioners. During his 44 years as pastor, 17 daughter and granddaughter Presbyterian churches were established. The log meeting house accidentally burned and a stone church building within adjacent session house was erected in 1738. Today, this original session house is used as a museum for church artifacts. In 1840, stones and all usable building materials from the stone church were carried across the road and used to construct the sanctuary worshipped in today.
taken from  Upper Octorara Presbyterian Church

History of the Church 1720-1870 burials start on page 159
Names of interest -
Martha Dickey 1762
Alexander Luckey 1747
McClellan
The parents of Mary Dickey Hillhouse (married William Sr. son James) :
JOHN DICKEY, born 1703 in Belfast, Antrim, North Ireland,
and died February 13, 1789 in York, York, South Carolina.
MARTHA MCNEELY married John, 1736 in Albedarle, Virginia,
daughter of GEORGE MCNEELY.
Burial: Bullock Creek, York District, South Carolina
Moses Dickey was born in Fallowfield Township, Chester County, Pennsylvania, he moved to Lancaster County which became Dauphin County. At some time lived near the Octoraro creek. Moses was captain in the Associated Regiments of Chester county, Pennsylvania in 1747-48. The mark of his grave in lost; it was presumably near the east wall of the graveyard, but his name is on the tablet of the memorial gateway erected in memory of Provincial and Revolutionary soldiers buried here.
Moses & Mary Dickey are buried at Paxton Presbyterian Church Cemetery in Dauphin County, PA.

Paxton Presbyterian Church
It is not known how Moses Dickey and John Dickey were related.

How Colonial and State borders changed since creation at n2genealogy
Posted by Jan Eloise Morris at 4:59 PM