The Haunting of Hillhouse

My journey had begun a month before, where most genealogist's end ... at the beginning ... in Londonderry, Northern Ireland the birthplace of Reverend James Hillhouse (1687-1740).  In 1719, Reverend James, along with (it is now believed) his brother Samuel & new wife Rachel and a group of his parishioners boarded a ship in Ireland to Boston.

Still in Boston in 1721, Rev. James printed his eulogy to his mother: Sermon concerning the Life, Death, and Future State of Saints, on the Death of Mrs. Rachel Hillhouse, Jan. 7, 1716.  The preface to the Sermon was penned by famous Puritans, Increase & Cotton Mather: father & son and successive ministers to Boston's Old North Meeting House.  (not to be confused with the Old North Church nearby where a lantern signaled Paul Revere's famous ride).  Cotton Mather had a long list of honorable accomplishments but his enduring mark upon history became his influence behind the Salem Witch Trials of the 1690s.

In 1722, Reverend James accepted his calling to minister the First Church of the North Parish of New London, in the Colony of Connecticut.  At the time of his installation, there were 7 members of the Church and meetings were held in the west rooms of Samuel Allen's Tavern.  A year later a small meeting house was erected in an area known as Raymond Hill.   In the summer of 1723, he sailed to Ireland to visit his family at Free Hall.  New London was changed to the name of Montville (perhaps a nod to the Hillhouse name, Montville translates to hill and village). 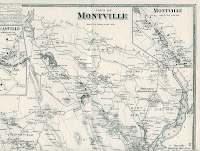 undated map of Montville shows W. Hillhouse land, cemetery
& Mount Hillhouse near Montville Hill (click to enlarge).
Rev. James married Mary Fitch in January of 1726.  In the years ahead, he became embroiled in a dispute with his parishioners over payment of his salary. By 1737, he and his parishioners had separated ways.  James was left heart-broken by the ordeal and died a short time later on 15 December 1740.  His death came at the young age of 53, leaving Mary a widow at the age of 35 with three young children,  William (12), James Abraham (10) & Rachel, named after his mother (5).  Had he lived to see his children and grandchildren mature, he would have seen men who fought fearlessly for our independence from Great Britain and whose leadership & wisdom laid the very foundation for their beloved Connecticut and this great Nation.

Raymond Hill Cemetery
The Hillhouse's are buried together, Rev. Hillhouse's grave is the alter stone shown
in the photograph with a plaque laid on the surface,
Judge William Hillhouse's Revolutionary War stone is shown separately.
Click to see details for family members in this cemetery
My week in Connecticut was spent walking through curtains of rain with brief hours of cloudy gloom and one last reprieve of two sunny days for leaf peeping.  I stayed at a lovely Federal style Bed & Breakfast in New Haven. The Farnam Guest House is situated on Prospect Hill, which is on the site of the old Hillhouse estate known as Sachem's Wood.   Once on the outskirts of New Haven, the old estate has long since been absorbed into Yale University and the Prospect Hill subdivision.  The lovely Georgian mansion that graced Sachem's Wood was torn down at the family's request in 1942.  Klein Tower now stands over its footprint beside a few ancient Oaks that the Hillhouse's arranged to have saved and cared for by the university.


In the early 1800s, Senator James Hillhouse (1754-1832) began the development of one of the most beloved streets in America and he along with his son, James A. Hillhouse (1789 - 1841) built Sachem's Wood at the end of the street high on the hill above ﻿Hillhouse Avenue.  They lined the street with American Elms which matured to form a temple canopy high above the street.  They played a large part in the fine architecture of the houses that filled the avenue in the 19th Century.  Although the Elm's are long lost, many of the house's remain and a leisurely walk on a quiet afternoon still can suggest what it might have been like to live on what Charles Dickens once called the most beautiful street in America.

When New Haven's original Burying Ground on the Green became overwhelmed with graves by a yellow fever epidemic in the late 1790s, Senator Hillhouse donated a portion of his farm and laid out plans for Grove Street Cemetery, it became the first chartered burial ground in the United States and it's design was the first of its kind using the idea of family plots. 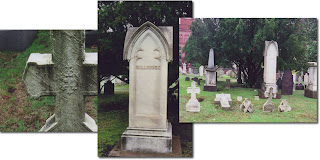 The Hillhouse Family plot at Grove Street Cemetery
note H insignia on the cross, the center stone is James Abraham Hillhouse &
the last photo is one of the plot﻿
click for detailed information on some of the family graves
On my last day in New Haven, I visited the Churches on the New Haven Green.  The only trace left today of the old Burying Ground lies beneath Center Church on the Green.  In 1812, the church was literally built over a small section of graves and today the Crypt shelters 137 grave stones of New Haven's founders and earliest citizens dating from 1687.  Members of the Hillhouse family are among them.  When I arrived in the narthex (foyer) of the church, a docent escorted me down to the crypt for a lecture and tour of the graves.  The crypt was well lite and the docent explained at length how fragile the graves are and the efforts made to keep them from sinking into the soft ground beneath.

Hillhouse Family in the Center Church Crypt
We climbed the stairs back to the foyer, and I spent a few moments looking through a table of church booklets.  A petite women was sitting across the room, quietly reading a book while she waited for the next visitor to escort on tour.  ﻿I said goodbye as I walked toward the door and she replied in a firm voice that seemed out of character for her tiny stature and something I can only explain as an echo across the ages: May God go with Thee.  Shaken to the core, I walked out into the sunshine of clearing skies.  And to this day, from time to time, I am reminded that I am in the perpetual care of my Puritan ancestors. 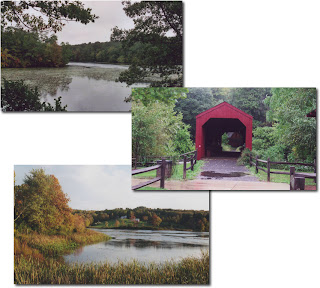 Leaf peeping in the Connecticut country side
Posted by Jan Eloise Morris at 5:44 PM