The Hilhouse Family of Bristol

PORTRAITS OF MR. AND MRS. JAMES HILHOUSE
OF CORNWALLIS HOUSE, CLIFTON
A PAIR OF PAINTINGS By Thomas Hudson ﻿ 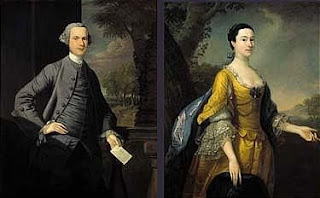 Mr. James Hilhouse is wearing a grey coat and breeches holding a letter in his left hand. Mrs. James Hilhouse is standing three-quarter length, wearing a yellow silk dress and holding a hat in her right hand. both oil on canvas each: 50 by 40 in. 127 by 101.6 cm. James Hilhouse, Son of James Hilhouse and Rebecca Lennox, was sheriff of Bristol in 1756. He built Cornwallis House, Clifton. He was the grandson of Abraham Hilhouse of Free Hall, Londonderry. He married Miss Martin and lived in Clifton House until his death in 1758.  Date of Painting is 'before 1758'
Auction Title: Mercer House, Savannah - The Collection of the Late James A. Williams
(this painting was auctioned in the year 2000)
PROVENANCE: J. de Courcy Hamilton, by descent Mrs. Seymour Obermer Mrs. George Sawyer Mrs. I. de Giorgio (Sale: Sotheby's, London, November 18th, 1970, lot 16).
Notes ~
James Hillhouse was building ships in the Bristol docks from the early part of the eighteen century. Ships were needed to export English goods mainly textiles, run slaves to the West Indies and bring back sugar and tobacco. James even invested in some slavers himself. He became a very wealthy man leaving his son George the equivalent of over a million pounds when he died in 1754. The company at different times ran both the Albion and the Limekin docks which are located on opposite sides of the river close to where the SS Great Britain now lies. With the advent of the Floating Harbour in 1806 trade greatly increased. George continued to run the company after his father's for a time with his partner Charles Hill.
The Hillhouse Family of Bristol
Mr Hilhouse of Bristol: Shipbuilder for the Navy 1749-1822
A new study of James Martin Hilhouse, the foremost ship builder during Bristol's 'Golden Age', provides a fascinating insight into the life and achievements of this multi-talented man and his famous warships.
Suppliers to the trade (Slavery trade in Bristol)
Thomas Hudson    Painter

Clifton is a neighborhood in the city of Bristol -
Clifton is one of the oldest and most affluent areas of the city, much of it having been built with profits from tobacco and the slave trade. Situated to the west of Bristol city centre, it was at one time a separate settlement but became attached to Bristol by continuous development during the Georgian era and was formally incorporated into the city in the 1830s. Grand houses that required many servants were built in the area. Although some were detached or semi-detached properties, the bulk were built as terraces, many with three or more floors. One famous terrace is the majestic Royal York Crescent, visible from the Avon Gorge below and looking across the Bristol docks. Berkeley Square which was built around 1790 is an example of Georgian architecture. Secluded squares include the triangular Canynge Square. (from Wikipedia)
The Mercer House Museum  Savannah Georgia
THE MERCER HOUSE - Home to famed antique dealer Jim Williams, the central character of the book and movie "Midnight in the Garden of Good and Evil." Jim shot and killed his lover, Danny Hansford, in the house and was tried four times for the same charge of murder. Jim bought the house for $46,000 in 1969, restored it and ran his antique business from the house. Jim's sister inherited the house and its contents once he, then his mother, died. The sister put the house on the market for $10 million in 1998, then took it off after the highest bid of $4 million was rebuffed. She now lives in the house located on Monterey Square.

Wondering if these portraits were hanging on the wall of the study in the Mercer House the night of Danny's murder ? Perhaps they are the only ones who know the true story of "Midnight in the Garden of Good & Evil" ;)

Forward - I've been informed these painting hung in the dining room (so William's secret seems safe).  Seems Williams enjoyed filling Mercer House with local luminaries and the Hilhouse's were tied in with a famous local family: the Lawtons (Spencer Lawton later served as prosecuting attorney against him in his murder case).

Find out more about Alexander & Sarah Lawton and their burial plot in Bonaventure Cemetery in my next blog.


Many thanks to Hillhouse descendant, Joseph Moore of Georgia for the lead to this story.