Sarah spent her childhood at Fairfield, the Alexander plantation, on the edge of Washington, GA. The home still stands as do many of the lovely Antebellum homes in Washington that were spared destruction in Sherman's March to the Sea.  Her brother, Edward Porter Alexander (1835-1910), was a distinguished Confederate General of Artillery and survived to pen one of the most respected accounts of the Civil War, Fighting for the Confederacy: The Personal Recollections of General Edward Porter Alexander.  ﻿ 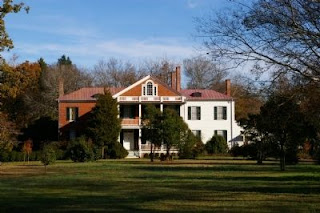 ﻿﻿﻿﻿﻿﻿﻿
Sarah married Alexander Robert Lawton in November of 1845 in Savannah. The Lawton's were a distinguished family of Welsh descent who settled in Charleston, S. C. at Mulberry Grove Plantation.  Both Alexander and Sarah's brother, Edward, were educated at West Point.  Alexander went on to serve as Brigadier General to Jefferson Davis and in the summer of 1862 his brigade joined forces with Stonewall Jackson's corps in battles around Richmond, Virginia. He was severely injured at Sharpsburg and after months of recovery, returned to duty and served as Quartermaster General for the remainder of the war.

After the war, the Lawton's returned to Savannah to Alexander's law practice and worked toward the rehabilitation of Georgia.  He served in both branches of the Georgia legislature and as vice-president of the Georgia Constitutional Convention in 1877.  President Cleveland appointed him Minister to Austria 1887-89.

Sarah was with her husband in Richmond during the war and in Austria.  It was noted that her worldly experiences enriched her conversation, making her a most interesting companion.

The Lawton's final resting place is as large as the lives they lived.  Overlooking the Wilmington River in the famous Bonaventure Cemetery on the edge of Savannah, the story of these exquisite tombstones in the Lawton Family plot tell many tales .. some fact, some legend. 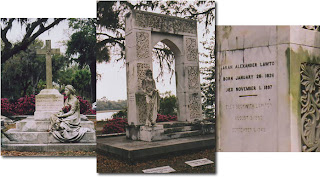 Alexander Robert Lawton﻿
Sarah Alexander Lawton
Corrine Elliott Lawton
Alexander Rudolph Lawton
﻿﻿﻿﻿﻿﻿﻿
These Italian monuments were sculpted by Raffaello Romanelli in Florence in 1898.  As with many of the lovely monuments placed in Bonaventure Cemetery, their story is expressed with symbols and by placement, often leaving interpretation open to myth and mystery.

One interpretation of the arched stone is of a gate to heaven with Jesus standing at the gate, Sarah and Alexander were allowed to pass through since their names are placed beyond the opening.  Corrine's epitaph reads Allured to brighter worlds and led the way.  One can only assume that since her parents were deceased before their stone was sculpted and placed that they had no control over its placement or its legend. 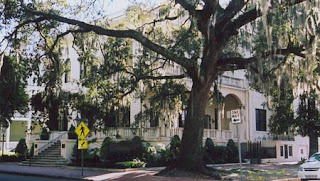