White Columns of Georgia - The Hillhouse's of Washington

It was Spring in Georgia and the dogwoods were in full bloom, a perfect day for a long drive in the country.  When I mentioned Washington to a lady in Savannah, she cautioned me to watch the road signs carefully The reason the White Columns were spared in Washington was because Sherman couldn't find it!  Its seems though that her statement was more for entertainment than historical fact ...

When the Revolutionary War tore through the southern Colonies, the Patriots of Wilkes County soundly defeated the Tory forces on Valentine's Day in 1779 at the Battle of Kettle Creek.  I've spent my share of  time walking Revolutionary War battlefields, there is a very distinct mist that lingers in those hills, very different from other hallowed grounds of the Civil War. Perhaps there are less tourists than on the Civil War battlefields to saturate the old energies. Kettle Creek was deserted the day I visited and the silence was deafening.

A few miles down the road, Washington received its charter on January 23, 1780, becoming the first town in the United States to be chartered in the name of the commander-in-chief of American forces.  By 1783, the town had been laid out with a public square, town common and plans for a 'Latin and grammar school'.  However, the area was still rough and tumble as the frontier lifestyle was not one in which gentility could prosper.


She was the daughter of General Elisha & Sarah (Jewitt) Porter of Hadley, MA, born on 29 April 1763.  David & Sarah were married on 7 October 1781.  As with many of their fellow New Englanders, they found their way south, preferring the milder climate of Georgia to the harsh New England winters. By 1787, David had established his family in Washington,  opening a general store and building a log cabin.  By 1800, David was operating a large plantation and using slave labor.

David died at the age of 47 on 24 March 1803, leaving Sarah with the plantation and three children under the age of 15.  David had also been editor of the local newspaper The Monitor.  A true pioneer, Sarah assumed management of the plantation, raised her children, became the first woman newspaper publisher in America by taking over management of The Monitor and printing the Journal of the Georgia House of Representatives in her print shop. 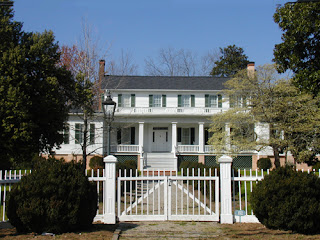 Sarah began building the center section of this lovely Georgian style house in 1814.

Her home was enlarged to its present form in 1869, when Gabriel Toombs acquired the property, and moved the end rooms from the Toombs Plantation on log rollers and added them to the house.  I was warmly welcomed to the home by the present owner, Betty Slaton, who graciously shared her Sarah Hillhouse research with me on a rainy spring afternoon.

David was buried in Washington at a grave site on early family property, the graveyard was built over by the town many years ago. Sarah died in Washington on 26 March 1831 surrounded by her children and grand children.  She was buried in Major Shepherd's graveyard in a field SW of his house and not far  from the tan yard.  Today the location is unknown.

David's sister, Mary, and her husband, William Prince were also residents in Washington.  Mary was the 2nd child of Hon. William and Sarah Hillhouse, born in Montville, CT on 10 April 1753.  William was the son of William and Mary (Holland) Prince of Montville born 6 March 1753.  They were married in Montville on 6 May 1775.

He married Mary Ross Norman on 14 August 1817 and moved several times around Georgia before settling in Athens. He served as state Senator and penned several books.  He was also remembered for laying out the town streets of Macon, GA.


He and his wife perished in the wreck of the Steamship Home off the coast of Ocracoke, N.C. on 9 October 1837.  They are buried at Rose Hill Cemetery in Macon.

Oliver started building this house in Washington in 1810 but he moved out of town before it was finished.  It stood nearly 100 years with a wrap around Victorian porch on two sides until 1905 when the front porch was removed and replaced with a stately Beaux-Arts Revival columned portico.

More about Washington, GA -
White Columns in Georgia by Medora Field Perkerson
Many thanks to Elaine Filipiak of Miss Fanny Tours for her time and knowledge of Washington
Quotes used from Images of America: Washington Georgia by Robert E. Willingham Jr.